"... a mixture of non-petroleum-based fats or oils. Non-petroleum oils include synthetic oils, such as silicone fluids, tung oils, and wood-derivative oils such as resin/rosin, animal fats and vegetable oils."


On a sunny Sunday October afternoon, a friend and I spotted plume of grey sludge, as we sat on a south-facing bench on San Leandro Bay near the Martin Luther King Jr Regional Shoreline. High tide was just beginning to ebb as I noticed an unusual right-to-left motion on the water in the distance. The air was warm and still. Hardly a cloud. The water was like mercury except for that curious movement that I kept noticing as we intently engaged in conversation about the books we are both writing about orphans and orphanages. I had seen movement like this before when I was a boy of 17 fishing for gar on the Trinity River in Texas, upstream of a sewage pipe. But that didn't register at the time.

A good deal of time passed as the restless indistinct mass crept toward us while we talked. Steam vapors rose from it as it curled around the eastern tip of Alameda Island and picked up speed. I looked at my watch. It was ten after four.

Eventually the undulating mass was close enough to make out its gelatinous consistency and a greyish color I had never seen in nature. Entrapped bits of debris bobbed and weaved. We stopped talking, hypnotized, as the mass of sludge rode the gathering current into the Oakland-Alameda Estuary. It was like being in a Sci-fi flick. "What the hell is this?" I said. "It can't be normal."

That was October 12, 2014. By the following mid-January, a massive seabird kill concentrated near Alameda was being reported in the news. The cause--a "Grey Goo of unknown origin."

Below (Image 1c) is the bench where we sat when we first noticed the plume. 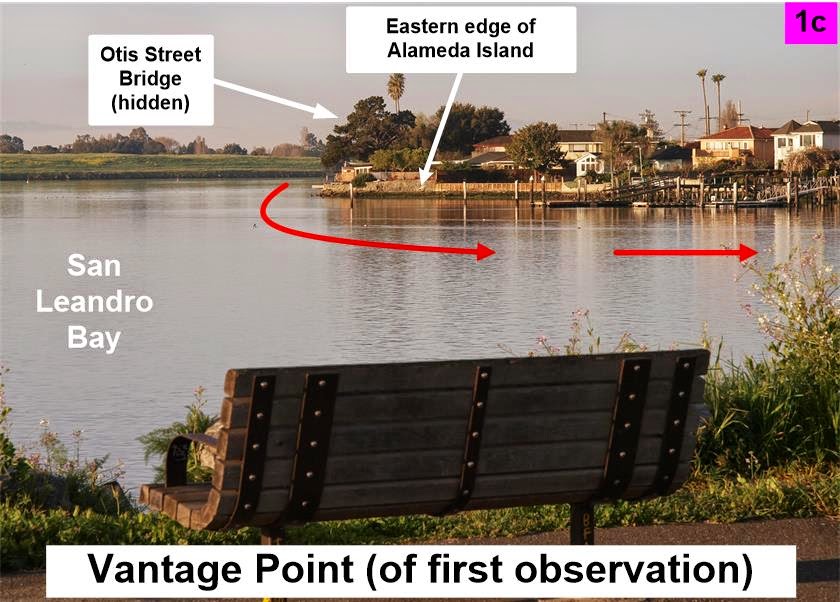 Alarmed now, we stood and followed from the bike trail on the Oakland side of the estuary as the accelerating sludge headed toward the High Street Bridge, hugging the far shoreline where the current was strongest. Below is a map (Image 1e) showing in red the plume's path that we observed between 3:45 and 6PM on the Sunday the Raiders were getting clobbered by the Chargers last year. 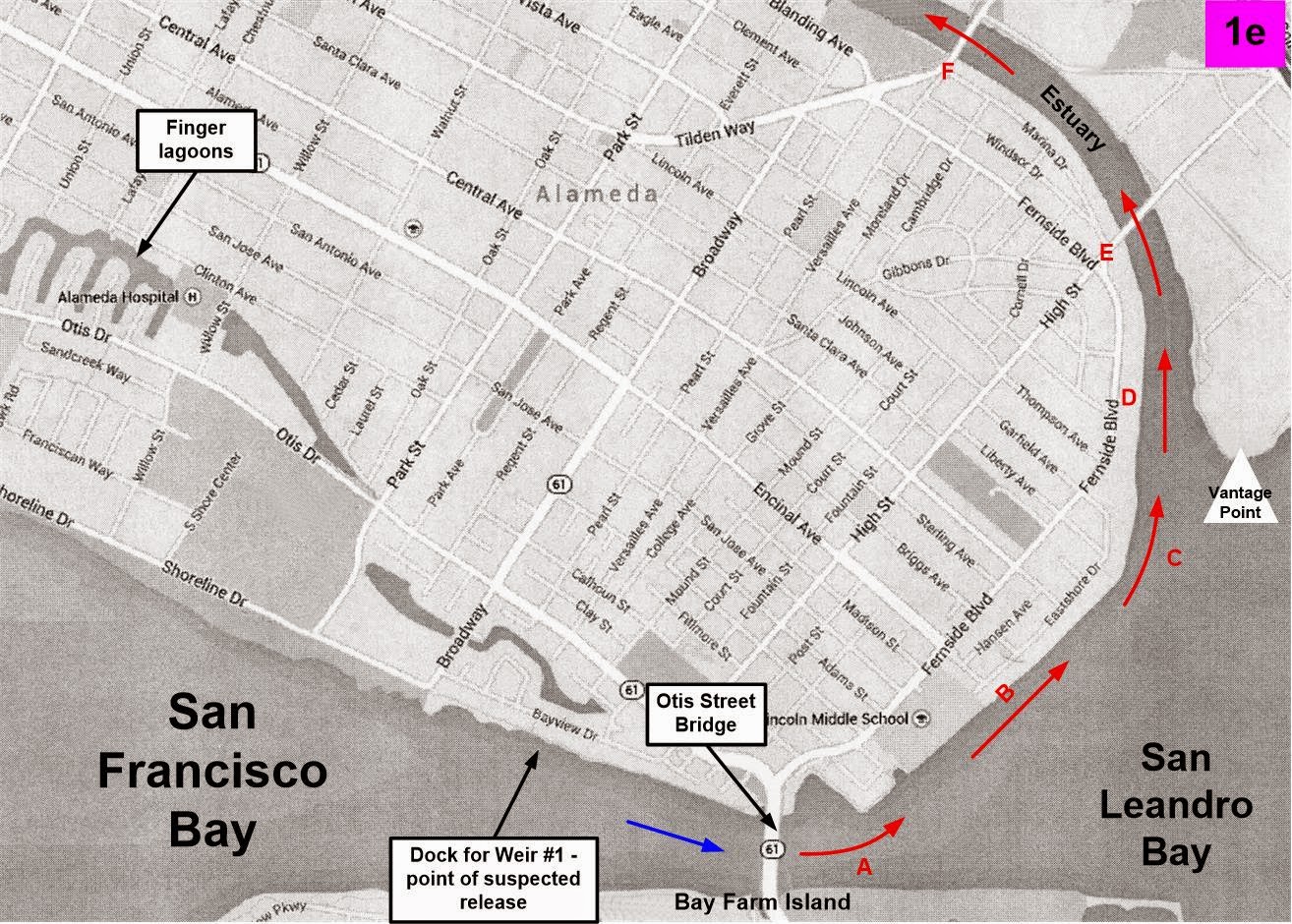 Image 1d was taken in March, 2015, from a few hundred yards north and east of the Vantage Point bench to show the Otis Street/Bay Farm Bridge hidden from view in Image 1c. Notice the abundance of sea fowl. It's a mixture of surf scoters, grebes and stilts. 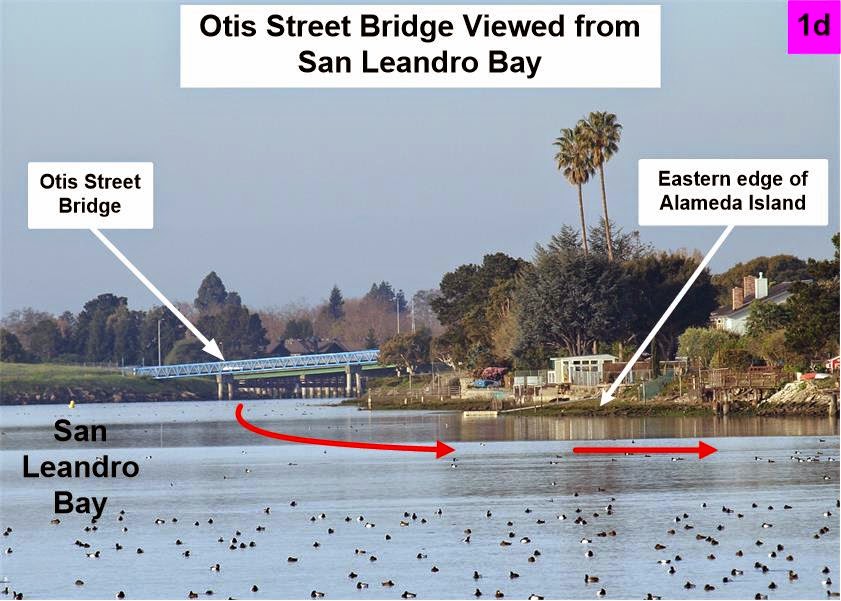 San Leandro Bay is a treasure of sea bird life that is severely threatened by effluent from not just Alameda's lagoons. Four natural estuaries drain street run-off here, as shown in the following Image 1w. 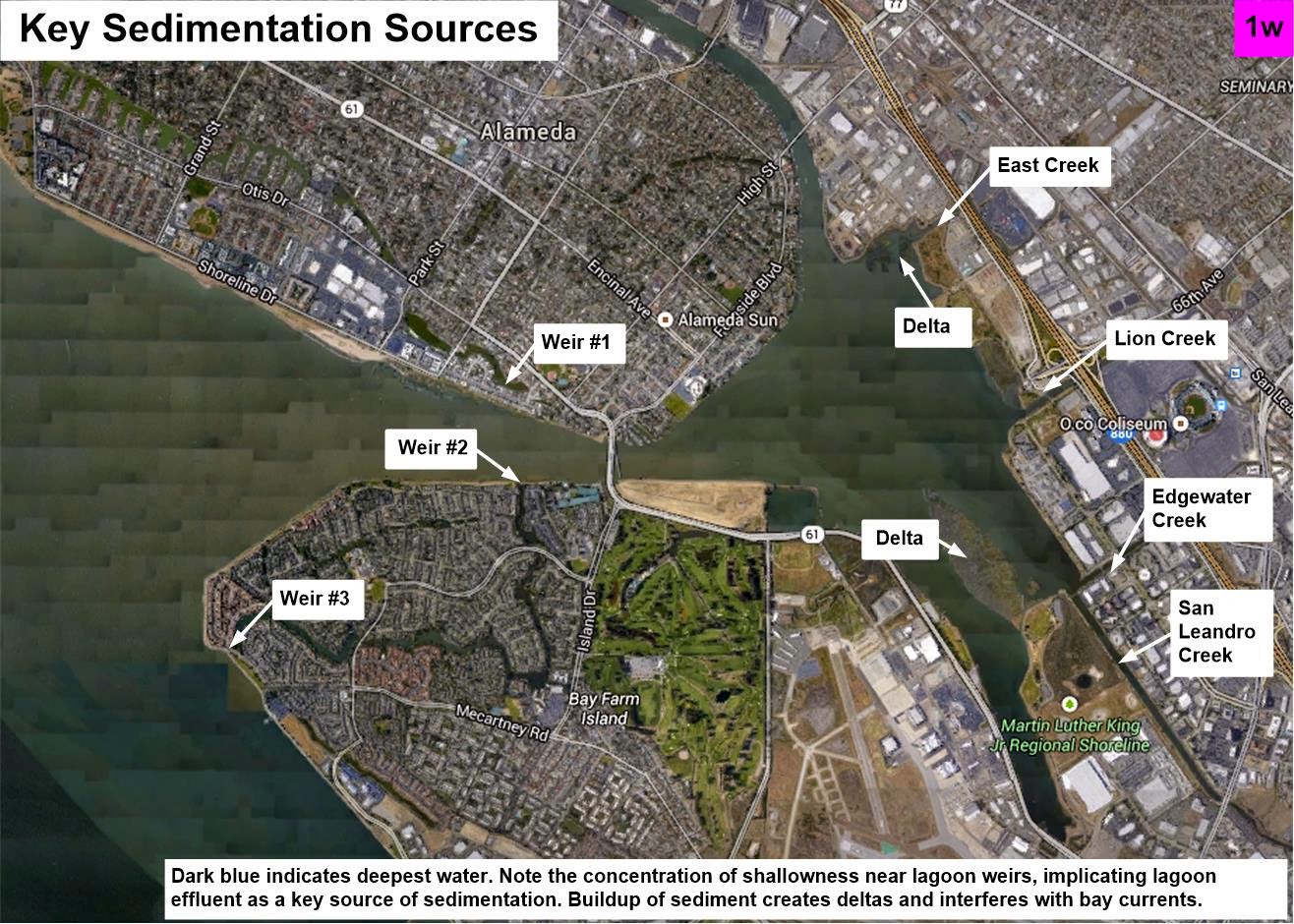 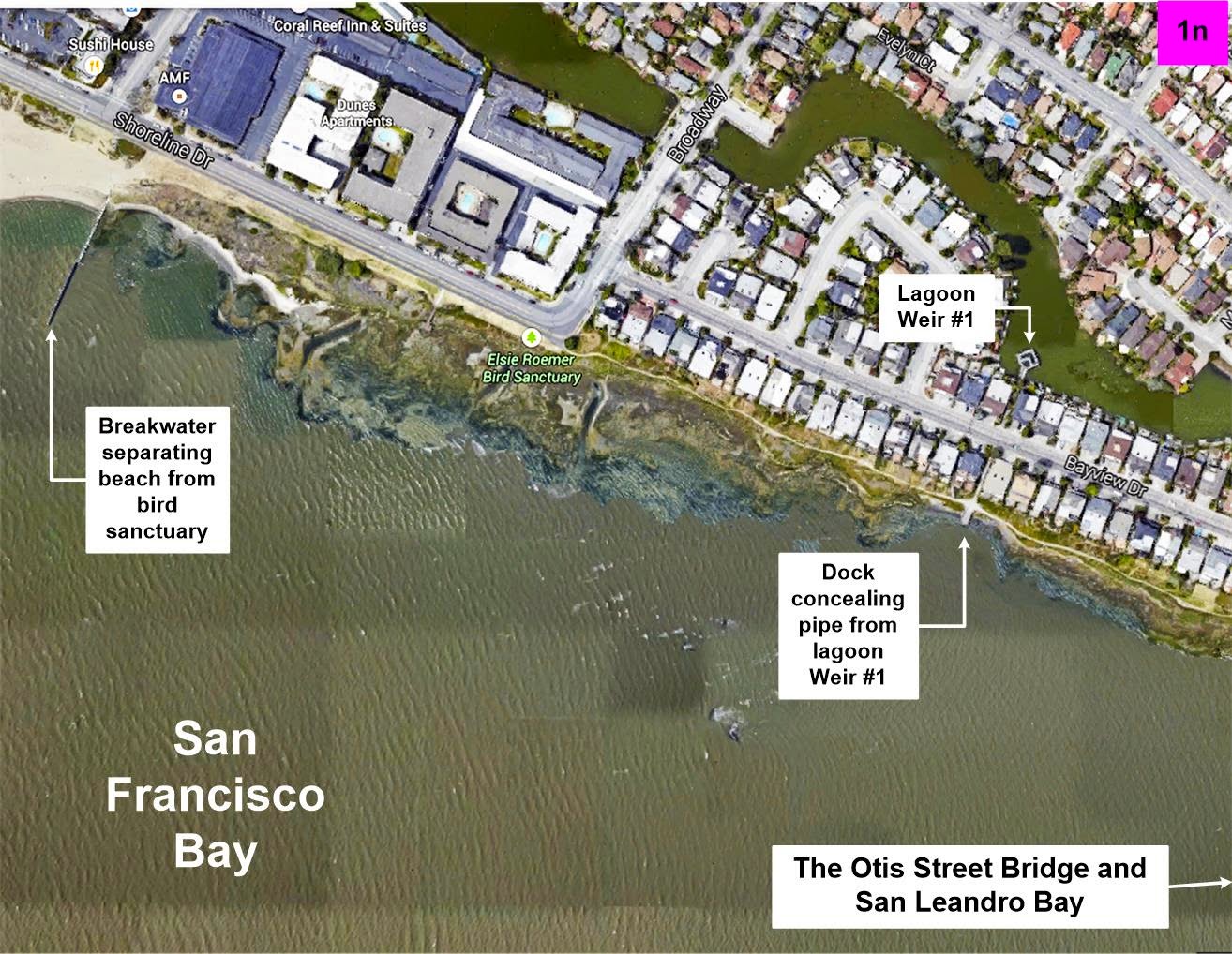 AN ECOLOGICAL DEAD ZONE? The Google Maps drill-down at right (Image 1n) shows an apparent ecological "dead zone" delta on Alameda's southern shoreline surrounding the Elsie Roemer Bird Sanctuary. Note the darker coloration compared relative to the healthy shoreline due east of the dock connected to Weir #1 in the tail of the lagoons.

Also note the three storm sewer outlets due west of the dock. This area shows the ecological effects of a concentration of street run-off from these three sources plus the discharges from the lagoon portal. YES, the lagoons capture run-off from storm sewers. People have been known to toss kitchen grease in the lagoons as well as used cat litter, all of which are illegal.

This discoloration shows that tidal marsh recyclers (mollusks, worms, crustaceans, etc.) are having a hard time keeping up with processing the city's organic output. 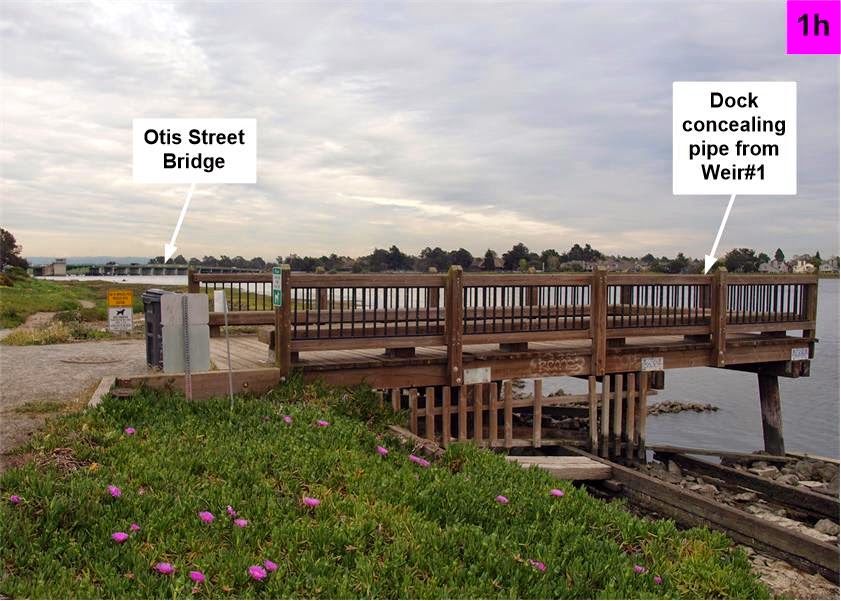 At left is the dock referred to above in Image 1n. Beneath the dock is the lagoon portal into San Francisco Bay from a pipeline leading from Weir #1.

Note the Otis Street/Bay Farm Bridge visible in the distance. Beyond the bridge is San Leandro Bay, where the plume of sludge was noticed by my friend and I. 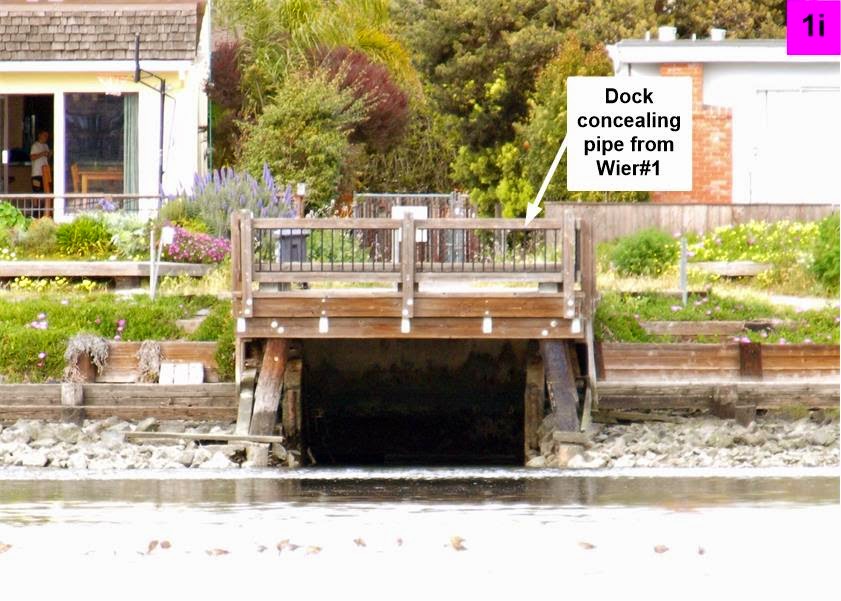 This is a frontal view of the dock viewed from the south, across the channel. Below the dock is the lagoon portal "Rectangular Orifice" of the pipeline to Weir #1. 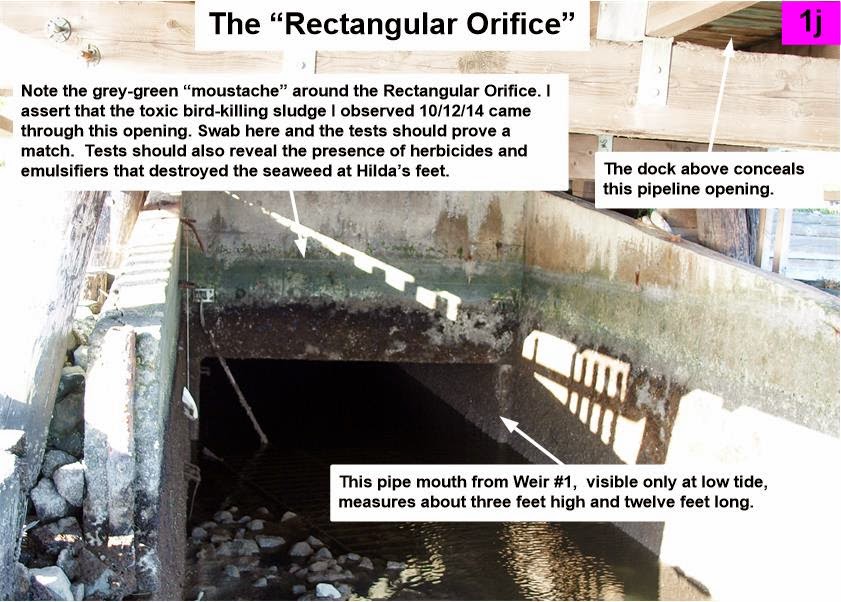 The Rectangular Orifice at left is the most probable source of the sludge, but proving so requires laboratory analysis of samples from the grey-green moustache and surrounding area to compare with samples of the Mystery Goo reported in news media since mid-January.

Cal Fish and Wildlife have taken samples for this purpose. 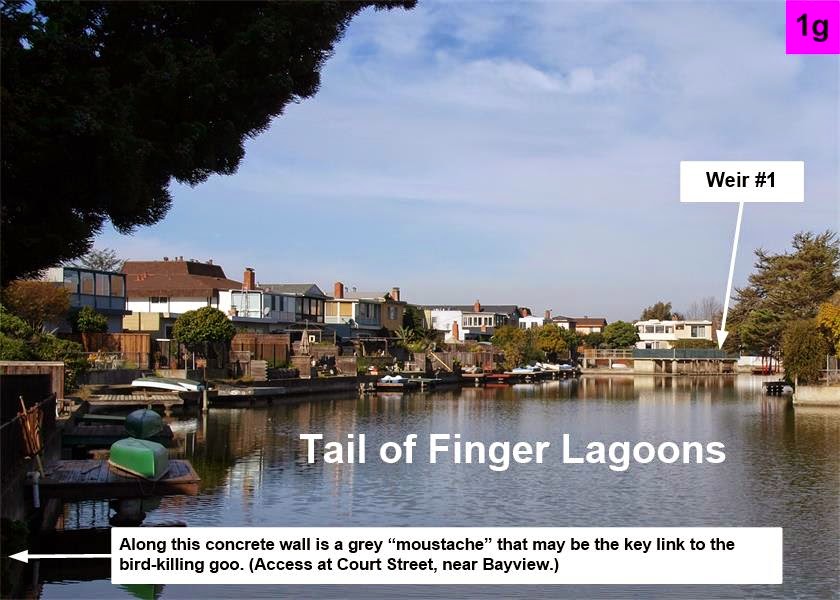 At right is a view (Image 1g) from within the finger lagoons at the end of the "tail," showing Weir #1, indicated by the arrow.

A weir is any device within a body of water that controls or influences the flow.