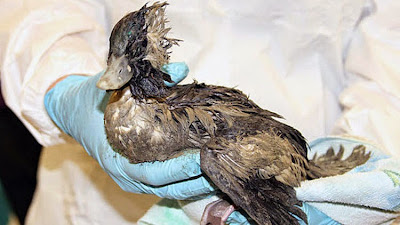 Progress is being made in identifying the seabird-killing Mystery Goo.

A 2007 patent application (see below) reveals that a surfactant* used in well drilling contains components matching eighty percent (four out of five) of the Goo's ingredients.

Silicone fluids**, Tung oil, seed oil, and animal fats (e.g., fish oil) are present in the surfactant and are among the five Goo components in lab results reported by Janna Rinderneck, the Fish and Wildlife scientist who managed the Goo's testing.

As quoted in SFGate.com, Rinderneck lists five probable components of the Goo:


"Scientists at several state and federal laboratories determined after more than two weeks of research that the substance was 'a mixture of nonpetroleum-based fats or oils.' ...'The exact oil- or fat-based product has not been determined, but likely suspects are:1) silicone fluids, 2) tung oils, 3) resins or rosin oils, 4) animal fats, and 5) edible or inedible seed oils from plants,' said Janna Rinderneck, an environmental scientist with the state Office of Spill Prevention and Response."


As shown below, seed oils, tung oil and animal fats (fish oil) are specifically mentioned in the surfactant's patent application. Silicone, being a polymer, qualifies as the "polymeric additive.":

Only petroleum has been ruled out. No item from this non-petroleum list has at this point been ruled out, but the presence of four of the five Goo ingredients points to a surfactant as the source of the Goo.

Now all that's needed to prove the Goo originated in Alameda's lagoons is to find residues of these ingredients there.

Or, maybe a whistle-blower will come forward.

*Definition and discussion of surfactants: What is a Surfactant? (Click Here)
**Silicone is a polymer.
Posted by Wordist at 11:41 PM