Continuing Evidence of a Lethal Surfactant

"When I think of the hundreds of birds killed, it is chilling to see this foam entering San Leandro Bay again, exactly six months later."


New Goo, or Remnants of the October Spill?

Either a surfactant is continuing to be released into the waters around Alameda or the foamy stuff in these photos is the remains of the initial plume I observed October 12, six months ago. Either way, the material needs to be sampled and tested. I have reported it but didn't call 911 because the volume wasn't massive. Should I have, given the previous responses to my calls?

Yesterday, April 12, I spotted this clear evidence of a surfactant along the northern (Oakland) shore of the Oakland-Alameda Estuary. Grey foam on saltwater usually indicates the presence of surfactant. For over a mile from the Fruitvale Bridge to San Leandro Bay, this unnatural-looking material (see Site 3 photo) clung to the shoreline and swirled in eddies on the slow incoming tide.

Using a reclaimed plastic pop bottle, I took a sample of several ounces and will hand it over to a  Hazardous Materials Specialist at Alameda County Department of Environmental Health today.

Following are my photos of yesterday's discovery. 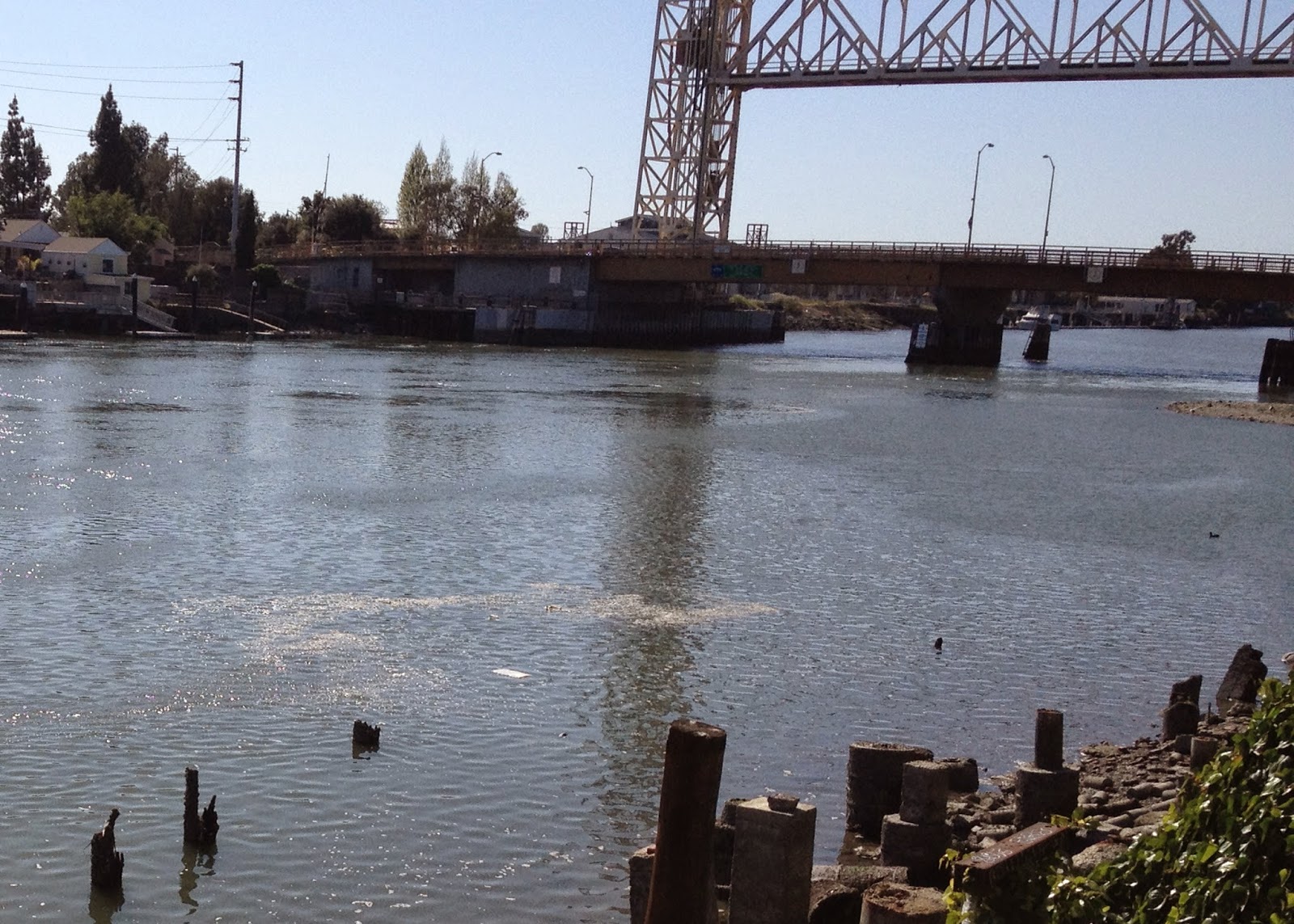 Site 1 faces west and is the spot where I first noticed these new dregs of foam Sunday, April 12, six months to the day since the October spill. Here, a hundred or so yards east of the Fruitvale Bridge, a thin trail of greyish-tan foam drifts lazily in an eddy. 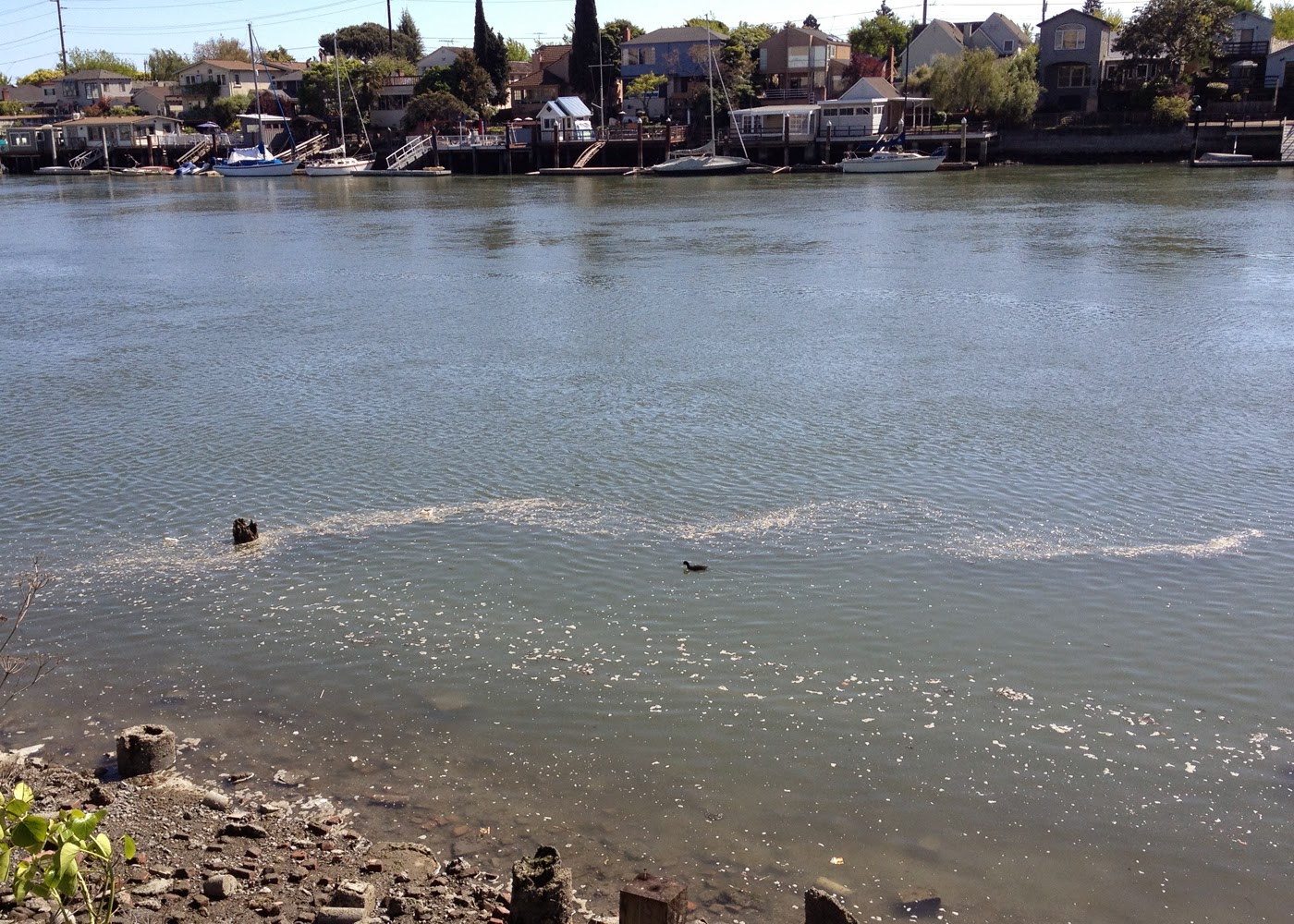 Site 2 is a few yards east of Site 1. It faces east and shows another eddy with foam, and a duck heading right for it. 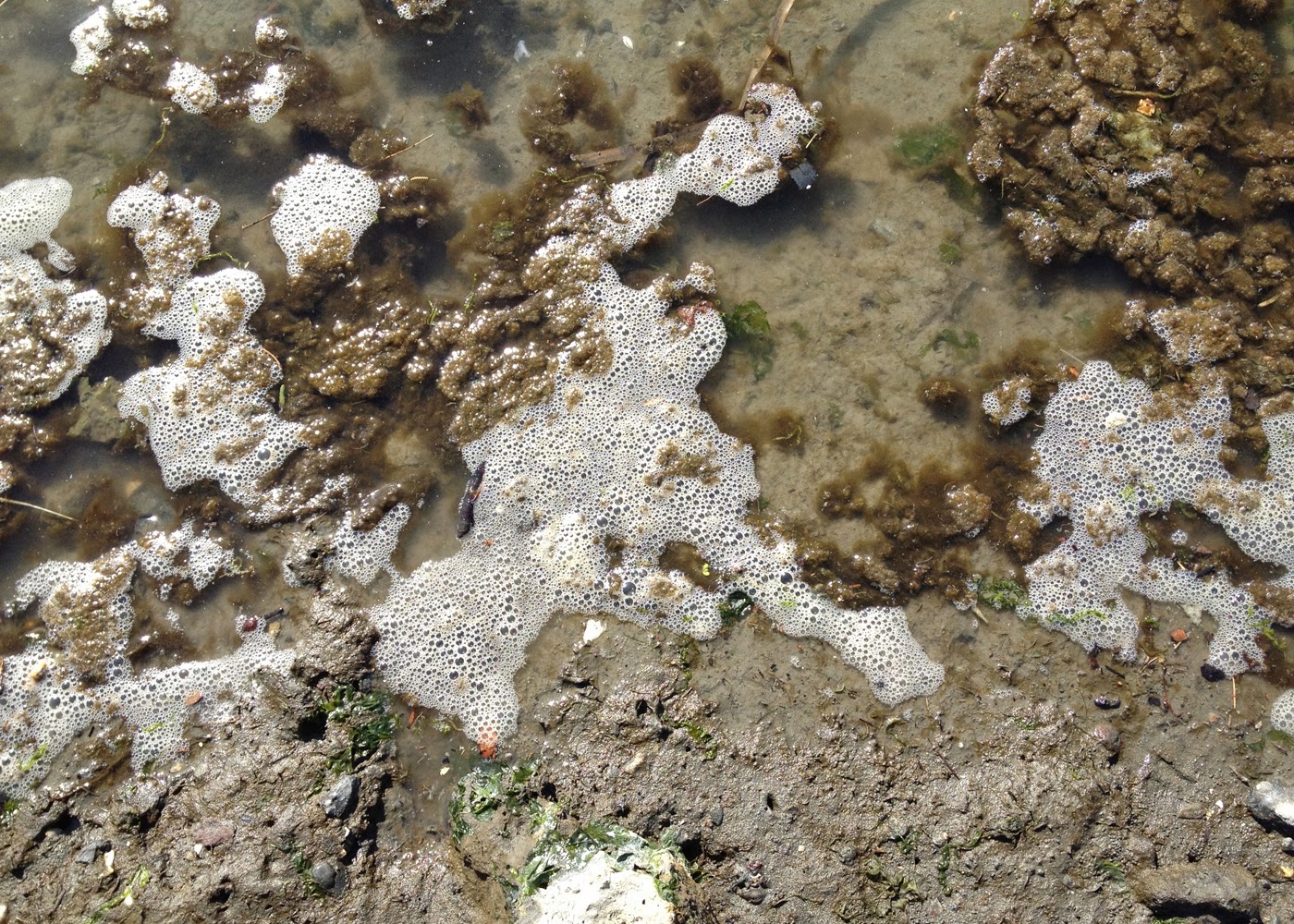 Site 3 is a close-up of the foam in Site 2. All the sites have identical material--bubbles in a matrix of greyish-tan liquid. With few exceptions, the bubbles are strikingly uniform in diameter and highly resilient. They don't burst easily when touched by a solid object. Instead, they attempt to attach.

Ponder what this material would do to feathers. Repeated exposures would create layer upon layer of gummy film as each successive layer dried in the sun. 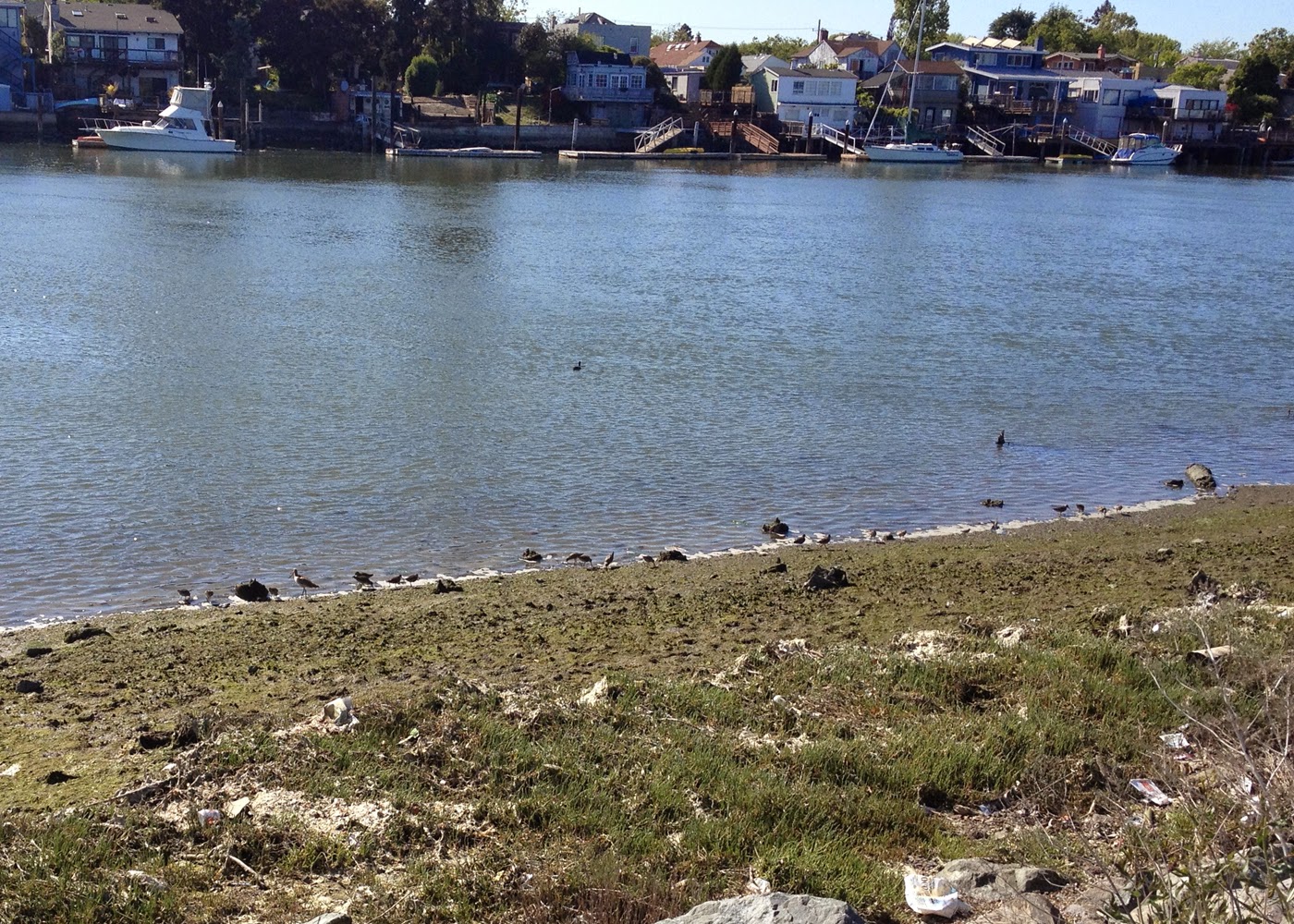 Site 4 is east of the High Street Bridge, a few hundred yards east of Site 3. 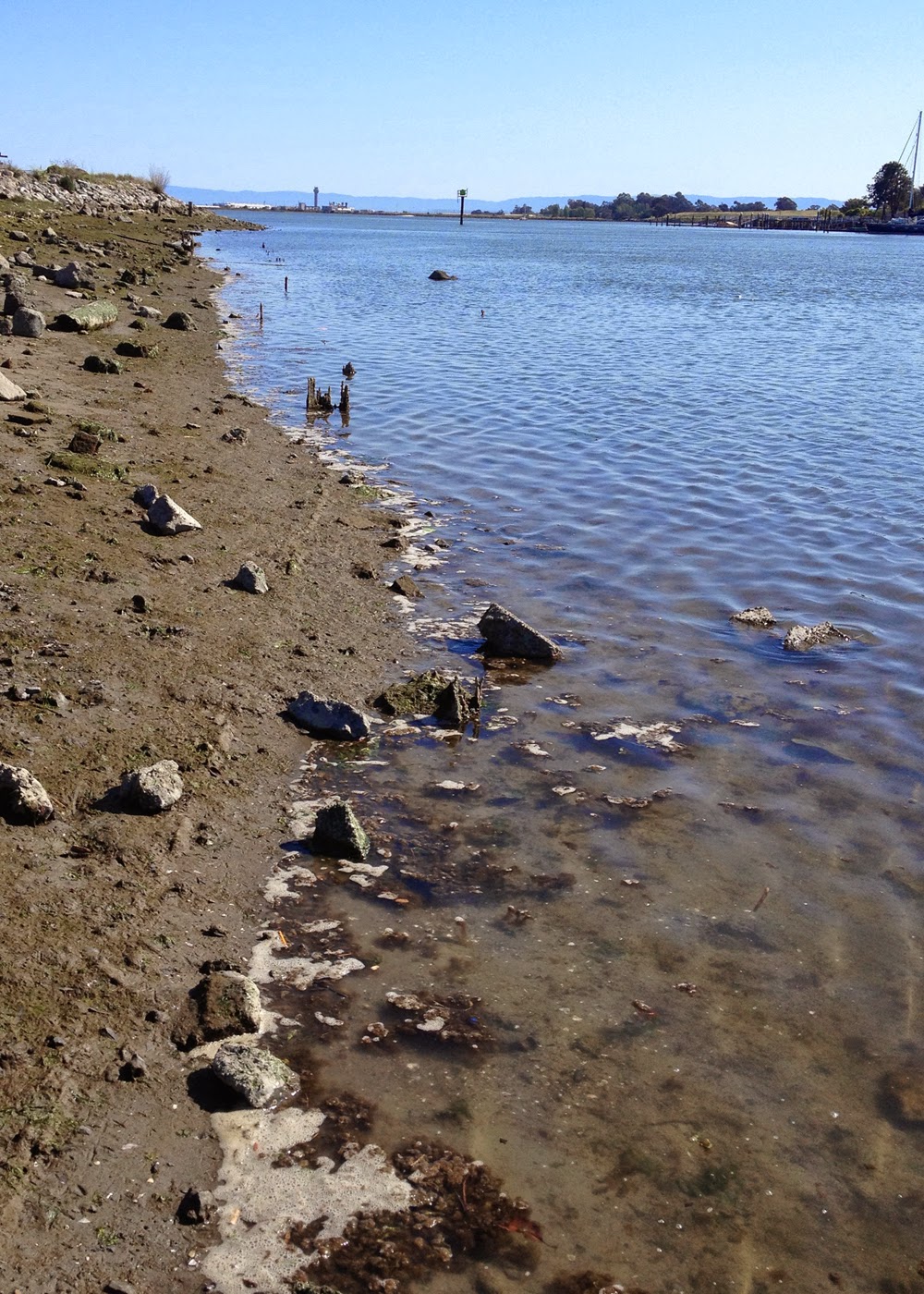 Site 5 is farther east. The control tower at Oakland Airport can be seen just beyond San Leandro Bay. 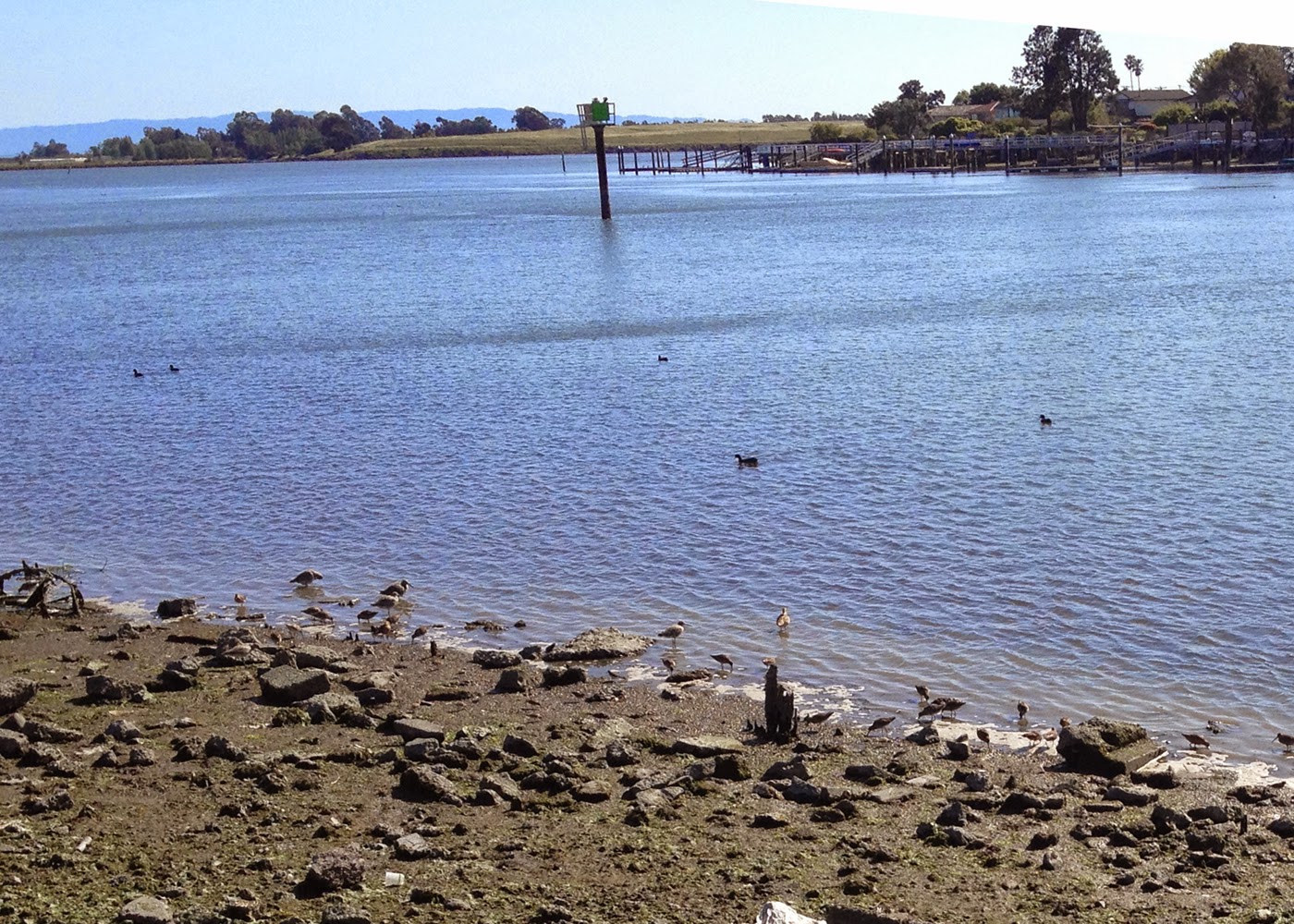 Site 6 is near the mouth to San Leandro Bay, facing the tip of Alameda Island.

Seabirds can be seen foraging among the foam. 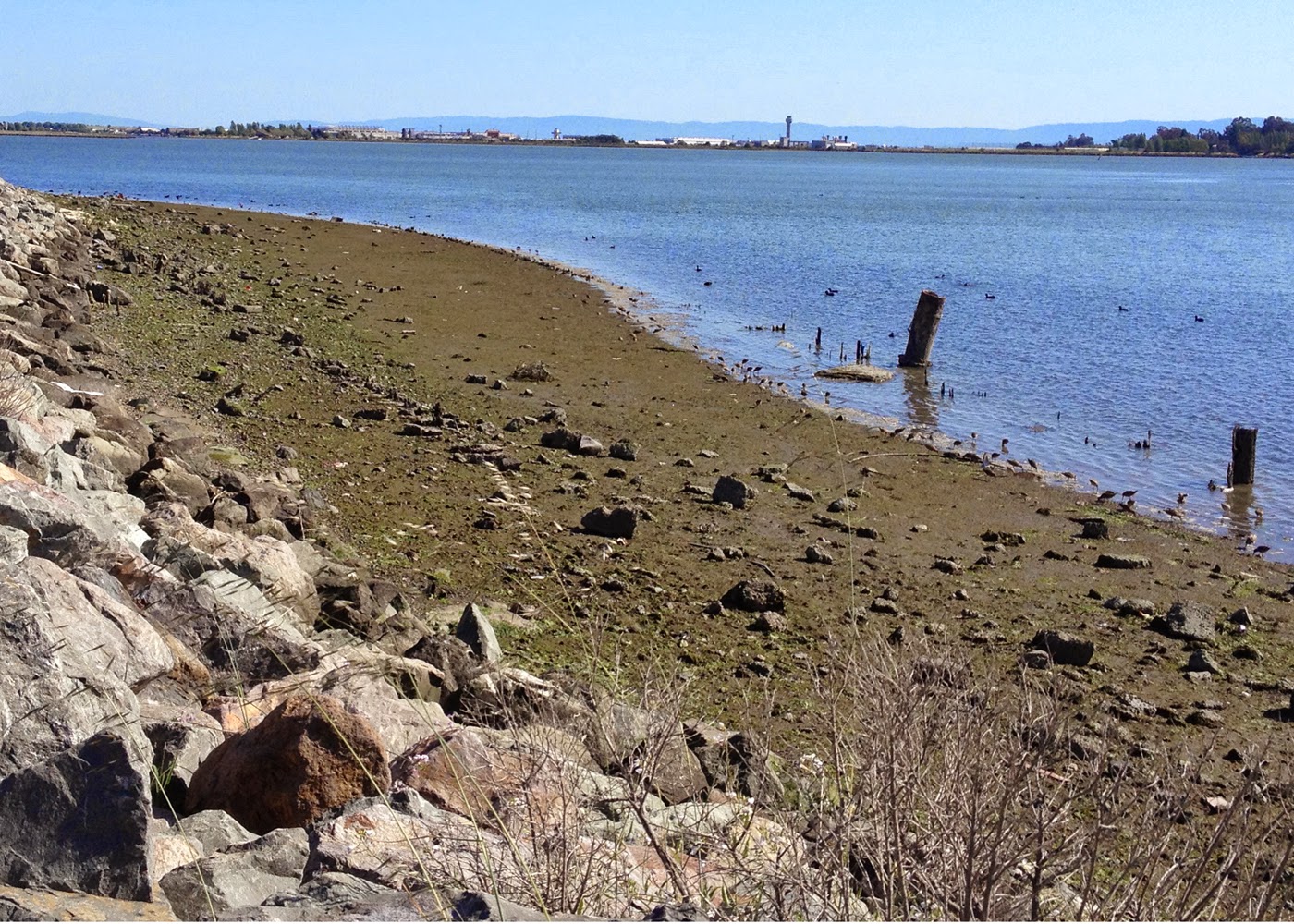 Site 7 is at the mouth of San Leandro Bay.

That pin at about 1 o'clock is the tower at Oakland airport.

When I think of the hundreds of birds killed, it is chilling to see this foam on the shores of San Leandro Bay again, exactly six months later.

How many times has the tide returned, delivering this deadly foam?

Update:
I dropped off my sample at the County Environmental office around 5PM.