From Dredging to Bird Goo: How Does It Happen?

I live on a seawater lagoon in Alameda and for some reason they are doing dredging this week all around the lagoon. Never seen boat traffic like this on the water here ever. Usually it is kayaks and paddle boats. So I shot this timelapse of the dredging. In case you have never seen it yourself. Choose to ignore if you want. I thought it was kinda cool. Posted to Facebook "Peeps" Group by Kevin Rockwell on Thursday, October 23, 2014

What could link the dredging of a lagoon to the San Francisco Bay Area's Mystery Bird Goo and Alameda's October 2014 Invisible Spill?

It is not the dredging itself but a side-effect--the post-dredging clarification of cloudy lagoon water with a foaming surfactant* which can create a plume of sludge that morphs over time from exposure to the sun and elements into bird-killing goo.

The mechanical disturbance of the lagoon floor necessitated by dredging clouds the water, referred to as turbidity.

Turbidity is unsightly and can be smelly, and it won't go away quickly. Not without help. The particles the turbid water contains can be toxic to marine life and damage habitat. Many municipal sewage plants routinely use surfactants for clarifying contaminated water, but their use is controversial and many surfactants are restricted throughout the world.

Evidence of the apparent use of a foaming surfactant appears in the photo at Image 1kc. The grey fringe around the white foam suggests a chemical reaction is occurring between the foam and the water's contaminants (undissolved and dissolved solids, in technical terms.) This photo was taken from within Alameda's finger lagoon community and posted on Facebook by Kevin Rockwell. 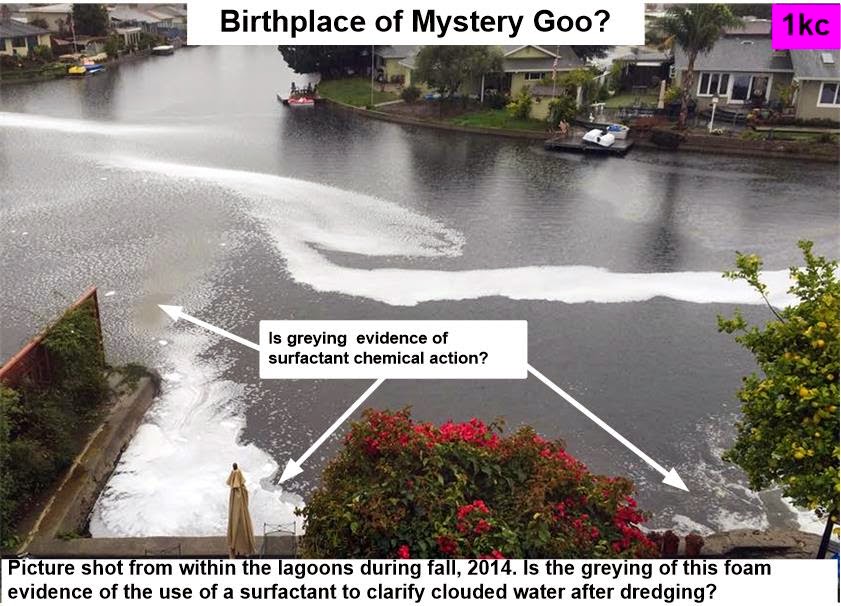 The photo shows many splotches of the same grey as the foam's fringe. It's the same color as the bird goo, and it floats like the bird goo. The reported chemical content of the goo ("silicone fluids, tung oils, resins or rosin oils, animal fats, and edible or inedible seed oils from plants") is not inconsistent with surfactant-laced post-dredging lagoon contaminants.**

Lagoon dredging stirs up decades-old deposits, throwing them into suspension. The surfactant "grabs" these particles, clarifying the water, but the residual composite "grey goo" must be accounted for.

I maintain that it is this mobile post-dredging composite of surfactant-contaminants that hitched a ride on the outgoing tide through the lagoon portal on October 12, 2014 and is the very material that I and my friend observed that afternoon.  I maintain that such a clarifying agent IS the source of the grey bird-killing goo.

SFGate.com reports that even California Department of Fish and Wildlife specialists aren't sure what, exactly, is in the "goo" that's harming the birds. International Bird Rescue describes the contaminant as a "viscous substance that destroys feather waterproofing, which can cause hypothermia and death;". This is precisely the effect a surfactant would have. (I have contacted International Bird Rescue about my surfactant theory.)

Look closely and note how hard the grey is to discern from surrounding water. This may be why neither the Alameda nor Oakland Fire Departments could act on my 911 calls. To the untrained eye, the goo can be practically invisible.

The next step is proving it. This photo is the closest I have come to finding a "smoking gun" for the Mystery Goo and the October plume of sludge I reported.

*An acronyn for SURFace-ACTive AgeNT. See Wikipedia explanation of surfactants A surfactant can be lethal to marine flora and fauna, stripping away protective slime and body oils, exposing these plants and creatures to parasites, disease and noxious or poisonous elements such as herbicides, leading to an often hideous death.