"There's yellow and black barrier tape in the bottom of the trench. Is/was there an ongoing investigation (other than mine)?"


The bid document  for a seawall sewer line replacement adjacent to Alameda's finger lagoons provides clues to how a massive amount of drilling mud could have gotten into San Francico Bay via the lagoons causing the January, 2015, massacre of 300 seabirds.

This project is the most likely source of the Mystery Goo uncovered so far because of the close proximity of the project to the lagoons and the likelihood the project entailed the use of a drilling mud matching the Mystery Goo's lab results.

Here's the quote from the bidding document:

Hawthorne Street is a few blocks west of Paru Street, where another part of the sewer project takes place. These photos concentrate on a Paru Street trench scaled down in dimensions and depth from a directional drilling project I observed last summer at the opposite end of Grand Avenue for pulling power conduit under the Estuary to Coast Guard Island.

The ten-inch sewer pipe mentioned in the bid document appears in the distance behind the fence bordering Grand Avenue (Image 3a.) The proximity of the sewer line to the lagoon is evident. Drilling near that pipe would risk leakage of drilling mud into the lagoon.

Image 3b shows the scale of this western  section of the network of finger lagoons. (You can "drill down" with Google Maps for a broader perspective on these finger lagoons.) 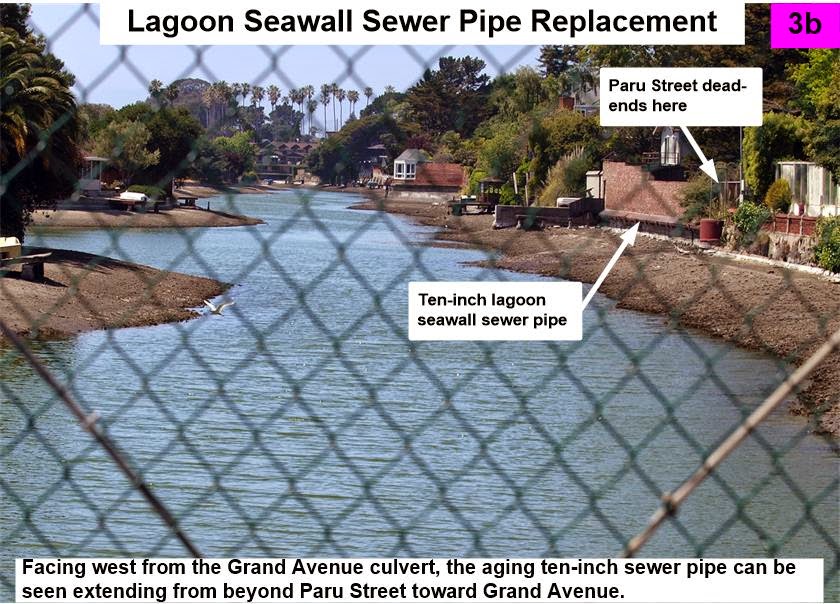 Image 3c gives a closer view of the rusty ten-inch pipe shielded from the elements by a roof of rusted corrugated tin. The large red round structure is a pumping station scheduled for replacement as part of the project. Has this portion been delayed? Why? 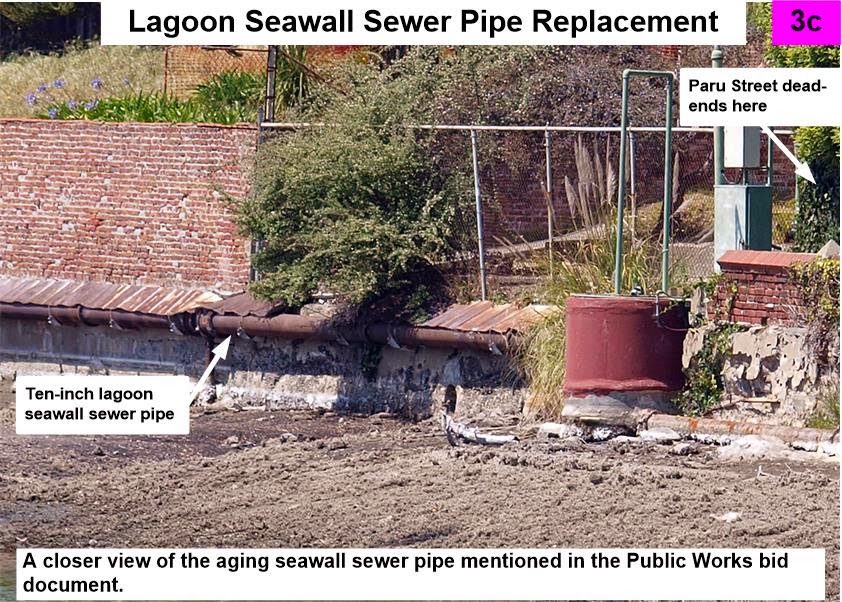 Image 3d is a cose-up of the pipe from the opposite side of the chain-link fence where Paru Street dead-ends at the lagoon.. Note the white arrow spray-painted along the fence, perhaps to show workers the direction to drill. 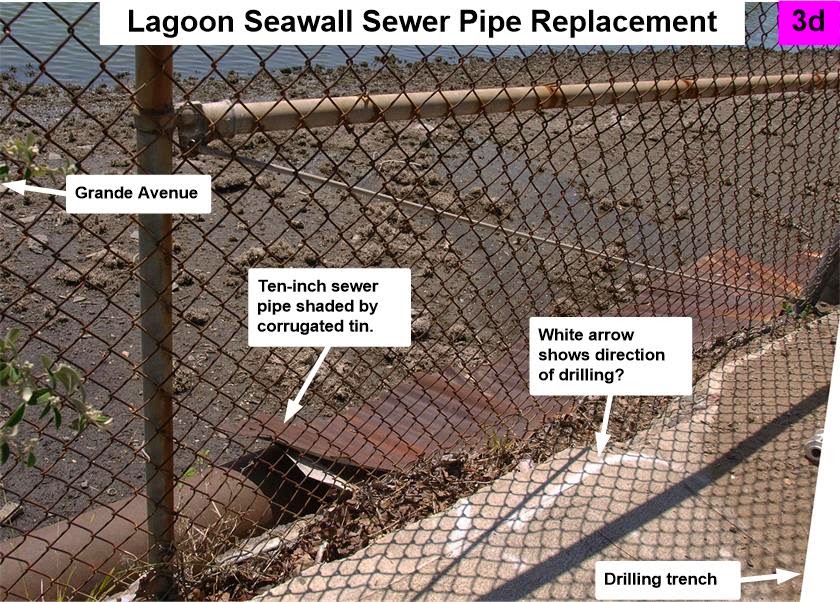 Image 3e shows a trench covered with a thin sheet of plywood. As mentioned above, this trench is similar in dimensions and depth to the trench in the CGI drilling project completed last summer. A collapsed "City of Alameda" safety barrier sign lies flat at the far end of the trench. 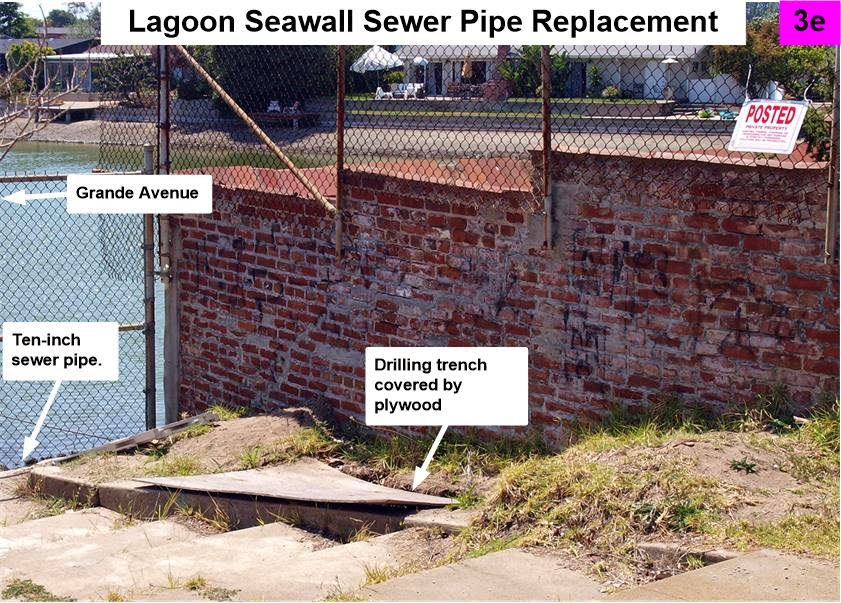 Image 3f is a close-up of the trench with the city sign arranged for ease of reading. Drilling would have begun just below the left "toe" of the sign and made a left turn toward Grand Avenue, as the white arrow indicated. 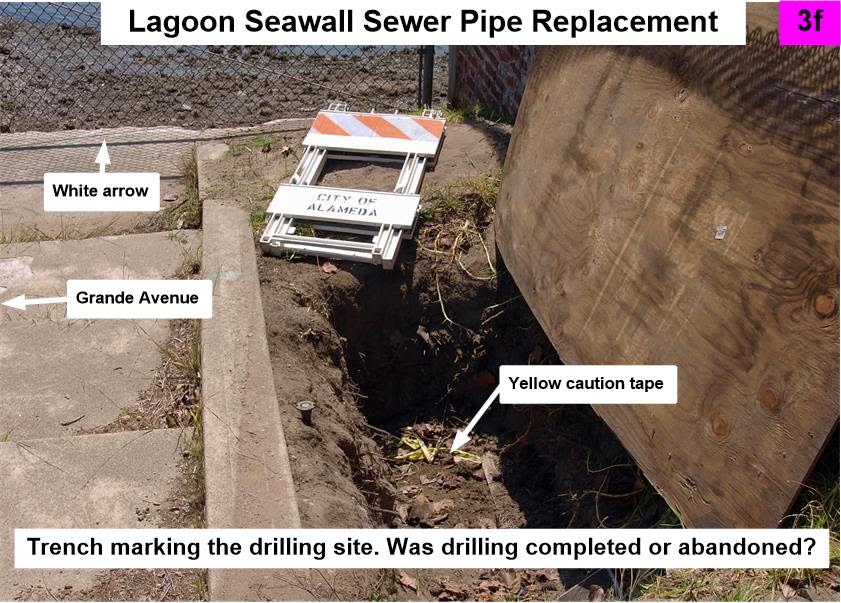 The following Youtube link illustrates a drilling method similar to the one specified in the bid document: (Click here for video illustrating a similar drilling project.) Note the drilling fluid being released through the drill bit. Guided directional drilling can be accomplished with a variety of equipment, but it's a well-established technology.


These photos raise as many questions as they answer, but they suggest that drilling occurred here and that the City was involved. Fresh grass has begun growing on adjacent piles of loose fill dirt. The City sign, the apparent age of the of the trench, the trench's proximity to the lagoon seawall and the specification of "directional drilling" in the bid document all imply this trench could have had something to do with the sewer line replacement project.

The dirt at the far end of the trench was quite damp, while the uphill portion was dry. This indicates the seawall is not sealed if lagoon water can seep into the trench and that drilling fluid could have seeped through into the lagoon.


Why has the trench remained open all this time? Why is an unsafe trench left exposing passersby to injury? Did the contractor(s) drill at the wrong location? Was there a miscommunication or was this an approved test outside the scope of the sewer replacement project? There is yellow and black barrier tape in the bottom of the trench. Is/was there an ongoing investigation (other than mine)? If so, what were the findings and conclusions?

A forgotten trench at the end of a dead-end street.


Incidentally, below are a couple of photos I took of a snowy egret just below the culvert mentioned at the beginning of this article. Note the familiar grey smudge on its head. Five months after the first bird deaths, the goo keeps showing up.