Get Involved or Get Ready for Empty Skies 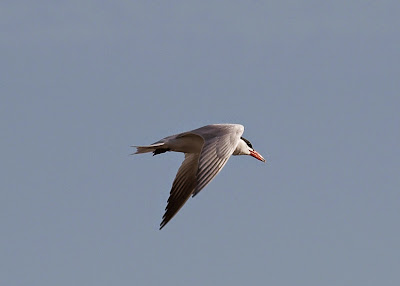 "More of us must become educated to the threat to wildlife imposed by ecological ignorance and indifference and poorly designed development and get actively involved--or..."

AT LEFT is a common tern looking for a meal in San Leandro Bay, where the marine ecosystem has entered a new era of catastrophic ecological threat due to global warming and other human activity.

Sediment buildup from Alameda's lagoons and dredging of the Oakland-Alameda Estuary have recently combined to shift tidal currents, drawing toxins from street run-off and lagoon chemicals into the feeding grounds of these magnificent aerial acrobats.

The human threat to marine wildlife here took a dramatic turn once before in the early 1900s, when dredging of a marsh turned the Alameda Penninsula into an island. The ecosystem had to adjust to the flooding and scavenging effect of powerful new tidal flows.

Further dredging of the newly-created Oakland-Alaemda Estuary made possible the Port of Oakland, a thriving seaport with hundreds of jobs, but a side-effect was a curse for the marine ecosystem of San Leandro Bay. New ship channel depths allowed larger ships to enter the Port but also increased the strength of tidal currents, drawing toxins from Alameda's lagoon effluent around the eastern tip of Alameda Island through the habitat of thousands of seabirds in San Leandro Bay.

Alameda's Tidal Curse is documented here on my blog: Alameda's Tidal Curse . The Curse is that whatever is carried down the Estuary from San Leandro Bay will be returned there and gets recycled repeatedly, day after day. The Tidal Curse is a prime suspect in the Seabird Massacre of 2015, where three hundred beautiful seabirds died and hundreds more were treated and released. The birds were caked in an oily goo that causes hypothermia a hideous death after hours of shivering from the cold.

This new ruling needs to be extended to include lagoons and all inland waterways feeding the San Francisco Bay. Call or write the Board with your comments. If you can--show up on June 12.

What will we learn from the 2015 Seabird Massacre? Will Alameda wake up? Will the City continue to use chemicals to control algae in their ancient finger lagoons? Will first responders become more responsive? Will the police show more interest in environmental cases? Will people use their cell phone cameras to record and report environmental threats? Will schools expand their ecological awareness curriculum?

Everyone enjoys seeing herons, terns, grebes, ducks, pelicans and egrets in our skies and waters. We share their living quarters. Urban development doesn't have to destroy wildlife. More of us must become educated to the threat to wildlife imposed by ecological ignorance and indifference and poorly designed development and get actively involved--or...

...one day the skies will be empty.