" What government body approved this pipeline design? What responsible authority would allow such inept engineering to be foisted upon the public? At what point do political cronyism and bureaucratic indifference become criminal negligence?"


Santa Barbara's Nightmare has returned. Delivered unimpeded with pinpoint accuracy by a storm sewer running along Highway 101, crude oil has again blackened a formerly scenic California beach and decimated a marine ecosystem. Didn't we learn anything from the '69 Santa Barbara disaster?

Click here for the breaking story from CBS: Santa Barbara's Nightmare , Do I need to describe the grim landscape that will appear on tonight's six o-clock news? Black sludge-covered seabirds and otters, seals and sea lions, struggling for life. An undulating mass of blackened seaweed where foamy breakers formerly rolled shoreward.

Why weren't automatic shut-off valves operating? Where was the backup system? A drop in pipeline pressure should have stopped the pumping and triggered an investigation. Catch basins could have been built along the pipelines for ease of clean-up and to prevent spillage from reaching sensitive areas. What design considerations were made for local seismic conditions?

Post-1969 and considering the high threat of earthquakes, catch basins should have been required. It is criminally deficient to not include even the simplest environmental safety features in pipeline design. We can send spacecraft to Saturn and beyond, but we can't build and safely operate a simple pipeline?

And don't use the worn-out cost excuse. Cost gets factored into the feasibility of the project. Safety is integral to cost. Are we mentally impaired when it comes to the design of ecologically prudent oil pipelines?

What government body approved this flawed pipeline design? What responsible authority would allow such inept engineering to be foisted upon the public? At what point do political cronyism and bureaucratic indifference become criminal negligence?

Lack of regulatory oversight was a major factor in the Goleta tragedy: Click here for an expose on how the pipeline operator dodged regulation  "Because the county was denied the regulatory authority to require that Plains equip its pipeline with an automatic shut-down valve in case of a rupture, The Santa Barbara Independent has discovered, the Plains pipeline is the only pipeline in the county without this key safety feature. "

The corporation must pay damages, but real accountability means some corporate types need to be in handcuffs and orange jumpsuits.


Storm sewers may be implicated in the still unsolved 2015 Seabird Massacre, presently under investigation by the Department of Fish and Wildlife, the Alameda County Department of Environmental Health, and myself. (This investigation is the main purpose of this web site.)

Storm sewers. We never think about them, but they are pipelines for toxins into San Francisco Bay. What goes down the gutter ends up in our marine environment.

Goleta and the Seabird Massacre are wake-up calls. Attend the June 10 (click here for details) PUBLIC WORKSHOP HEARINGS FOR THE SAN FRANCISCO BAY STORMWATER PERMIT This hearing will consider comments regarding pending action which will help protect the entire San Francisco Bay from the discharge of toxic waste through storm sewers. 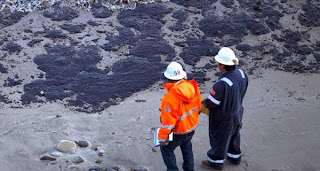 How many seabird massacres does it take for you to take action?