"Attack algae with chemicals and you attack the foundation of the marine food chain and put at risk every marine creature, including seabirds."


(Below is my presentation to the Regional Water Quality Control Board Hearing in Oakland on July 8.)

"I am Monty Heying [rhymes with “flying”], a 14-year resident of Alameda.

This is a plea for strict enforcement of the new MS4 regulations. My concern is for the thousands of seabirds whose habitat in San Leandro Bay is threatened by contaminants released from Alameda’s stagnant finger lagoons, which were built in the 1950s without circulation pumps or an aeration system for algae control.

1. Attack algae with chemicals and you attack the foundation of the marine food chain and put at risk every marine creature, including seabirds.
2. Chemicals usage in the lagoons has apparently increased due to the effect of global warming.
3. The lagoons have become an ecological wasteland (see photos.)
4. I have evidence suggesting that these chemicals have so damaged the environment around the lagoon portal that herons and egrets no longer feed there.
5. In October 2014 (see Timeline) I observed tidal currents drawing grayish-brown lagoon effluent through San Leandro Bay, where migrating seabirds abound.
6. How much time do we have to reverse the destruction of marine habitat?"


The following images and Timeline document: a) the utter destruction to marine habitat within the lagoons, b) the deterioration in marine habitat in San Francisco Bay apparent from contaminated effluent from the lagoons, c) the apparent use of a surfactant to clarify the lagoons after dredging, d) a map showing the path of a plume of grayish-brown sludge and debris I observed flowing into and through San Leandro Bay at the time of the dredging, e) a timeline documenting related events and observations, and f) a copy of my complaint #42975 with CalEPA. 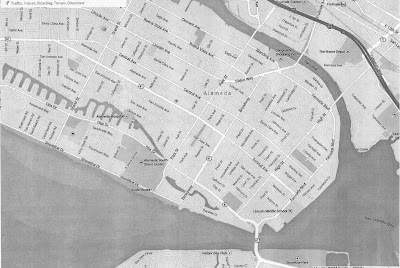 The Finger Lagoons, at mid-left, extend half-way across the south-eastern edge of Alameda Island, and connect with the San Francisco Bay through a single 3x12-foot portal just west of the bridge to Bay Farm Island.

Lagoon photos below were taken from Grand Avenue looking westward down the spine connecting the fingers. 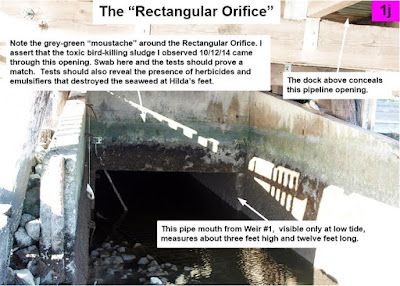 Millions of gallons of water must pass through this small 3x12-foot portal each year into San Francisco Bay. It takes two weeks just to empty the lagoons for annual maintenance. 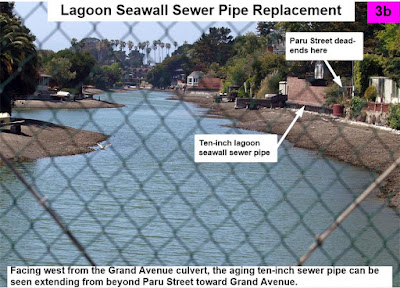 At left is the long spine of Lagoon #1, starting at Grand Avenue and looking west, toward Washington Park.

The water level has been lowered for annual maintenance.  Note the lack of green marine vegetation.

The lagoons are a biological wasteland. 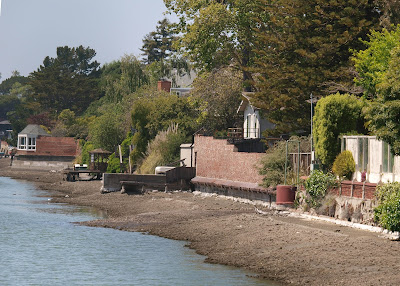 At right is a close-up view of the right (north) side of the lagoon. Still no sign of  marine vegetation vital to seabird habitat. 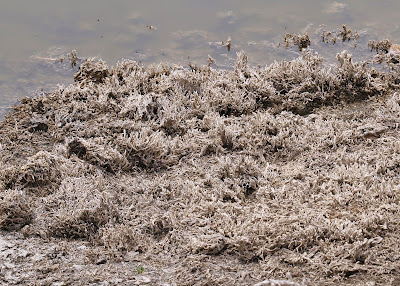 At left is a further close-up, showing the dead vegetation. This devastation is universal throughout the entire lagoon system.


Whatever chemicals are being used have been frighteningly effective. 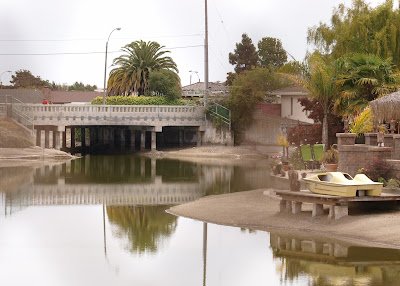 At right is a view looking back toward the Grand Ave. Bridge.

The absence of marine vegetation is pervasive. No moss, no seaweed. Nothing.  Marine habitat destruction is complete. 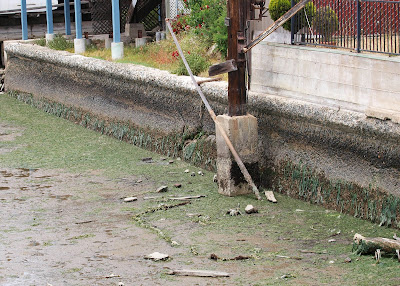 At left is a healthy marine environment along a seawall a few blocks west of the finger lagoons. Note the abundance of green marine vegetation. 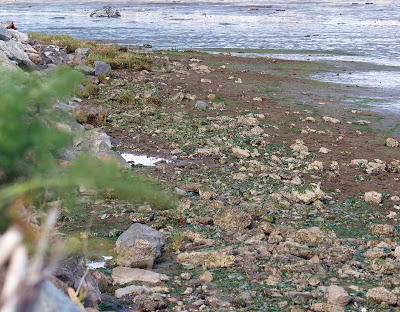 At right is another nearby example of a healthy marine environment. Note the green vegetation. 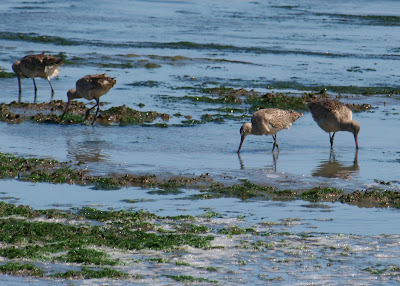 At left, marbled godwits feed in a healthy marine environment. Note the abundance of seaweed.

All three previous photos contrast markedly with the devastated marine habitat in the lagoons. A few birds may occasionally be seen there looking for food, but finding the cupboard bare, they soon leave. 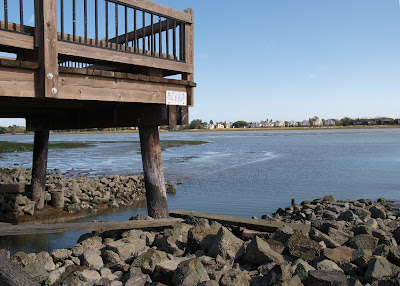 Below the dock at right is the previously shown lagoon portal that delivers contaminated effluent into San Francisco Bay.

For years, I used to delight in observing a night heron and snowy egrets feeding on small fish below and to either side of this dock, but not since the surrounding marine environment was devastated by whatever has been released from the lagoons. 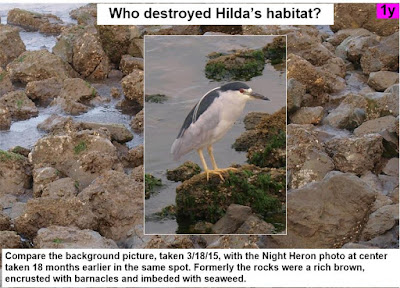 The photo in the center at left was taken September 12, 2013, a few yards to the right of the dock shown above. Note the abundance of seaweed on the rocks.

Surrounding the center photo is a shot taken 18 months later, in March, 2015, in the same area and the same time of day, around 7AM. Note the stark absence of vegetation. 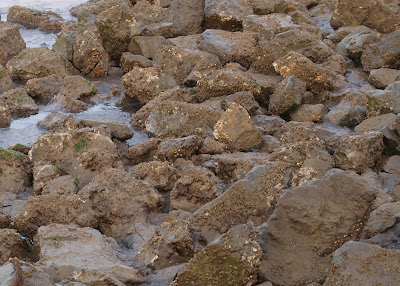 At right is the same March 2015 photo without the inset of the heron. The rocks are virtually bare of vegetation.

This is evidence of the ecological damage done to this marine habitat during this 18 month period. 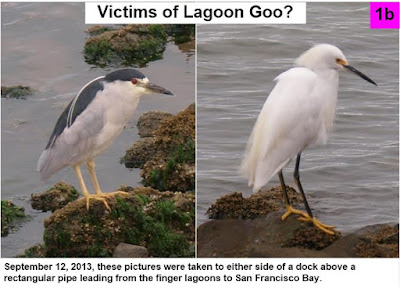 t left are shots taken the morning of September 12, 2103, of the night heron and snowy egret that used to regularly feed below the dock.

Mar 2015 – I filed a complaint (#42975) with CalEPA, which was referred to County Environmental Services.

Apr 2015 – I presented my findings to the Alameda City Council. “AlamedaGoo.Org” blog created to inform citizens. 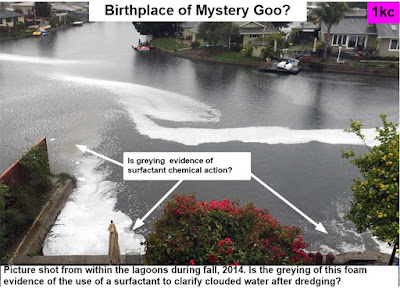 The photo at right of Lagoon #5 was taken around November 20, 2014, right after dredging. The large plume of white foam is evidence of a massive quantity of chemicals.

You will notice the foam is turning grey around the margins, indicating chemical action between the foam and particles in the water, as would be expected of a surfactant.


Surfactants are used for algae control by Clear Lakes, Inc. CLI was hired by the Alameda Department of Public Works to "keep the lagoons clean of trash," according to a city engineer. 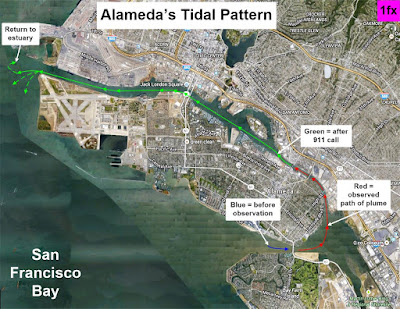 At left is a map of Alameda with arrows indicating the direction of travel of the plume of greyish-brown sludge and debris I observed October 12, 2014, (see Timeline) as dredging was underway in the lagoons.

It is apparent that strong tidal currents in the Estuary combined with sediment build-up outside the lagoon portal to move the lagoon effluent around the eastern tip of Alameda Island and through San Leandro Bay. 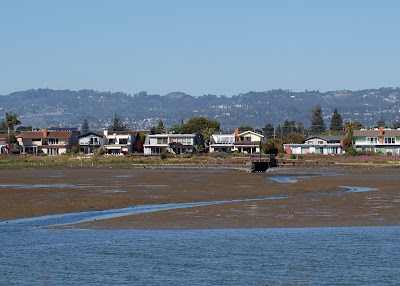 At right is a shot of the dock  and lagoon portal (seen at center-right) during low tide from across the Alameda-Bay Farm channel.

Note the build-up of sediment caused by four years of drought. 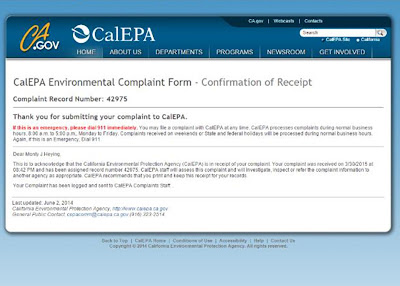 At left is the complaint I filed in March with CalEPA concerning the plume of sludge. CalEPA referred my complaint to Alameda County Environmental Services.

I have not heard from anyone about progress.